Jim Paterno spoke with Jeff Blumenthal of the Philadelphia Business Journal to discuss recent bank branch activity in the Philadelphia market. Paterno offered enlightening commentary in describing Chase Bank’s bank branch initiative and its effect on the region’s other competing banks. As Chase looks to identify and open new branch locations, there is a sense of urgency that can be felt by others in the market and a sobering reality that premier locations come with a hefty price tag.

See below for the full article: 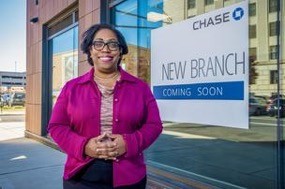 JPMorgan Chase & Co., led locally by Michelle Lawrene, has identified more than half of the 50 branches it plans to open in the Philadelphia region over the next five years.

“The strategies of the established banks here have been informed by Chase’s new presence in the market.”

JPMorgan Chase & Co.’s push into the Philadelphia market, with plans to add 50 branches in the next five years, has apparently ratcheted up competition for the best potential branch locations in the region.

“I definitely think there’s been an impact,” said Stockton Real Estate Advisors founder Jim Paterno. “The strategies of the established banks here have been informed by Chase’s new presence in the market.”

Paterno, who works with banks to identify branch locations, said there seems to be a renewed imperative to capture high-profile locations.

“It’s my experience that the established competitors here are looking to box out newcomers,” Paterno said. “I’ve seen multiple banks vying for the same space and Chase is responding by paying up or acting aggressively to quickly lock down high-profile locations.”

Chase (NYSE: JPM) entered the Philadelphia retail competitive landscape last September as part of a larger plan to enhance its footprint in major metro areas such as Boston and Washington, D.C. The bank opened four branches last fall, in Camden, Wilmington, Villanova and Center City Philadelphia (17th and Walnut streets) and plans to have at least 10 up and running by the end of the year — including one in Cinnaminson, N.J., in May and another in Upper Darby in June.

It has identified 27 of the 50 locations and earned regulatory approval for 21 of those. In March and April alone, the New York banking giant has filed 12 applications and received approval for six of them.

The strategy is clear: Even if Chase is not opening these locations in the near future, it’s important to secure the land before a competitor does.

There are eight established banks that have at least 50 Philadelphia-area branches each and they combine to control three-quarters of local deposits in a market with 90 competitors. These big banks are most impacted by Chase’s plans for the region.

Of the 27 sites Chase has identified, five are in South Jersey, three are in Delaware, nine are in Philadelphia and 10 are in the Pennsylvania suburbs.

Chase Regional President Michelle Lawrence said some sites have become available due to regional consolidation. For example, Chase opened a branch in December, at 795 E. Lancaster Avenue in Villanova, that was vacated by Royal Bank America after it was acquired last year by Bryn Mawr Bank Corp.

Unlike Chase, which is establishing a footprint organically, most of the established banks inherited their branch networks via acquisition and have been pruning locations over the past decade in response to the rise of online and mobile banking. Some have also waited for leases to expire to relocate branches. But with Chase making it known in banking circles over a year ago that it would be planting its flag in Philadelphia, these banks have been preparing for the competition.

For example, Citizens Bank opened just one new branch in 2018 but was extremely busy reshaping its retail network — closing five branches, relocating four and renovating nine existing sites. In the past 12 months, Bank of America has closed one branch, opened three and renovated four. Part of this activity is the normal course of business, but there is also an element of preparing for a deep-pocketed newcomer by snapping up as many good locations as possible in advance.

“This happens any time a newcomer enters the market,” Paterno said. “Everyone wants to protect their investment.”